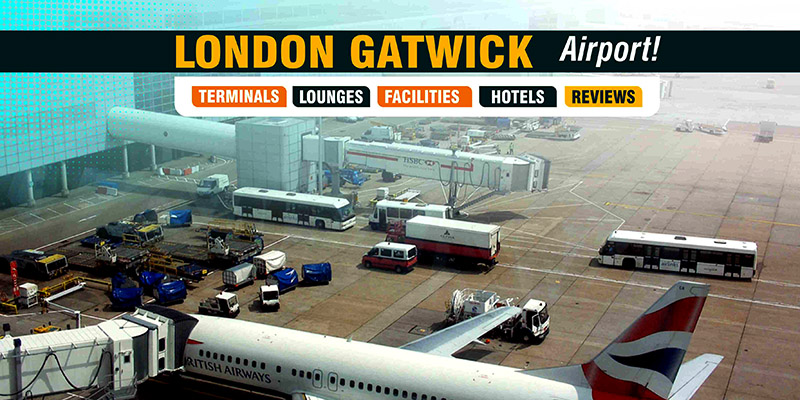 Gatwick Airport, which is officially known as the London Gatwick airport is an international airport in south-east England. Being 29.5 miles south of Central London, it is the 2nd busiest airport in relation to the total passenger traffic in the United Kingdom after London Heathrow.

In the late 1920’s, an aerodrome was opened at Gatwick, and since 1933 been used for commercial Gatwick flights. The airport includes two terminals in the North and the south of the airport covering the area of 98,000-meter Squares and 160,000-meter squares respectively.

Employing the use of main runway 3,316 m, it is wielded as a single-runway airport in Gatwick.  Even though there is a secondary runway which is not put to use because of its proximity to the main runway. In Europe, it is the 8th busiest airport as a total of 45.6 million passengers traveled through the airport in 2017.

London Gatwick Airport includes two terminals, north, and south. Both the terminals have the shop, restaurants, airside and landside which areas are also accessible to disabled passengers. Facilities for baby changing and feeding are also available. Special lounges have been made for business travelers. The connection between north and south terminals is by 0.75 miles by two-way automated people mover landside.

The official opening the south terminal which is the central and the main pier was on 9th June 1958 with 11 aircraft stands. With an enclosed pier-based terminal, it was one of the world’s 1stairport which allowed passengers to walk to the waiting areas near the aircraft under covered.

With the growing number of passengers, a circular pier was attached to the terminal building.

At the cost of £110 million, the pier was opened on 16th May 2005.  The pier is linked to the main building of the north terminal by the largest air passenger bridge in the world.

There are various hotels near London Gatwick airport if you don’t like to sleep at the airport.

A budget hotel located at the departures level, beside the security on the 3rd floor of the south terminal.

A budget airport hotel is located next to international arrival in the south terminal which offers 4-24 hours rooms in the day. Transit passengers should have a valid entry to stay in the UK.

The hotel is connected to the north terminal directly through a walkway and through free shuttle service to the south terminal.

This hotel is connected to the south terminal via the walkway. Rooms are available on the day only from 9:00 AM – 6:00 PM.

This hotel is located opposite to North terminal providing a free 2-minute transfer to the south terminal.

Connected to North Terminal directly via covered link bridge, this is a 4-star hotel. Rooms are available in the day from 9:00 AM to 6:00 AM.

Located on the level 1 of the Terminal, one can access the lounge by paying at the door, through a pass or through lounge membership programs.

Also located in the north terminal on Airside, you can enter this lounge by paying at door or through a pass.

Also located on the Airside of the North Terminal, one can access the lounge by paying at the door or bypass.

Located in the north terminal, airside one can easily access the lounge by paying at door, by a pass or through various membership programs.

Located in the south terminal airside by pier 1, passengers can access this lounge by paying at door, prepaid passes or via lounge membership programs.

Located on the Mezzanine level in the South terminal, airside one can easily access the lounge by paying at the door, by a pass or through various membership programs.

Located at the arrivals Concourse in the South terminal, airside one can easily access the lounge by paying at the door, by a pass or through various membership programs.

The services of free Wi-Fi are available at the airport for 90 minutes. You just have to connect to “Gatwick Free Wi-Fi” and follow simple steps to sign up. If your first session is over, you can buy some additional time by reopening your browser and connecting to Boingo hotspot.

Throughout the airport, self-service Surfbox internet stations are available.

Mobile charging slots are available at the Surfbox kiosks and also have the printing facilities.

Airport London Gatwick via bus and coach service is linked with more than 100 UK towns and cities. Most buses serve the south terminal on the lower forecourt but some buses are also serving the north terminal outside of international arrivals on the lower level.

Various car rental services are available at the airport including companies. The service is available across from the north terminal.

The 24-hour shuttle service is running between the terminals every few minutes.

The south terminal of the Gatwick Airport has the railway station, which is linked to the north terminal by a free shuttle service. The fastest to travel from airport to central London is the Gatwick Express, a 30-35 minute journey to and from London Victoria Station leaving every 15 minutes.

Art at the Airport:

Throughout the airport, the works of the 3 local artists are now exhibited. At the south terminal, the artwork of unique mosaic celebrating Her Majesty’s Diamond Jubilee, which is created with 5,500 pictures of people from Kent, Sussex, and Surrey.

Various ATM’s are available in both the north and the south terminals. All the credit and bank cards are accepted which are valid in the UK.

On the way to the gates, rooms are available for taking care and feeding the babies in the check-in area after the passport control in Arrivals. The rooms for baby care are marked with baby care symbols.

The strollers are also available to use free of charge upon the arrival at the airport. It is to be given back once used at the collection points in Baggage Reclaim.

The baggage trolleys are available for a deposit of £1 or €1 coin, which is later refunded.

The airport provides peaceful places to pray or meditate in interfaith chapels in both the terminals. Every Monday, services are held by many people of different religions according to their religious dates. The services usually last not more than 25 minutes. In the north terminal, the chapel is available on the 1st floor to the landside before the entrance to Hampton by Hilton. In the south terminal, the chapel is on the 3rd floor to the landside near Caffè Nero. Both the chapel is available for 24 hours.

The children play area is an unmanned area with toys and TV’s for watching kid’s shows and cartoons. Kid zones are available in the north as well as a south terminal in the departure lounges.

ATM’s are available on both the terminals as well as Moneycorp exchange desks for 24 hours.

There are four world duty-free shops three of which are available for 24 hours a day.

I booked special assistance this year for the first time. I was so impressed with the service which is efficient and the staff was very helpful and friendly even some people were giving them a hard time. The special assistance service is great and I can recommend it to anybody. The man who drove the shuttle to the plane was very friendly and nice and went an extra mile for me and two other people. One person in the reception area was complaining that they did not come to the lounge for them. I just couldn’t believe how difficult and selfish some people can be. There is not a single cent charge for this service and some people are never satisfied. Thank you, Gatwick for making my travel easier as well as for people with disabilities.

Only one word, atrocious! The airport is run down, overcrowded, confusing and the staff was pathetic! They were Rude, unhelpful, ignorant and the staff outside just stood around with their phones. The airport looks like a joke, needs a massive refurbish and new responsible staff.

Came into Gatwick from Faro and I’ve better things to say about Gatwick than Heathrow LONDON AIRPORT! The landing was smooth, and the second I entered the Gatwick North Terminal, boy o boy I was impressed. Carousel area wasn’t busy at all and we found our bags in less than five minutes. The airport shops were very not very expensive and very clean. Signage could have been far better and toilets could have been much cleaner. But overall, it was a wonderful experience.