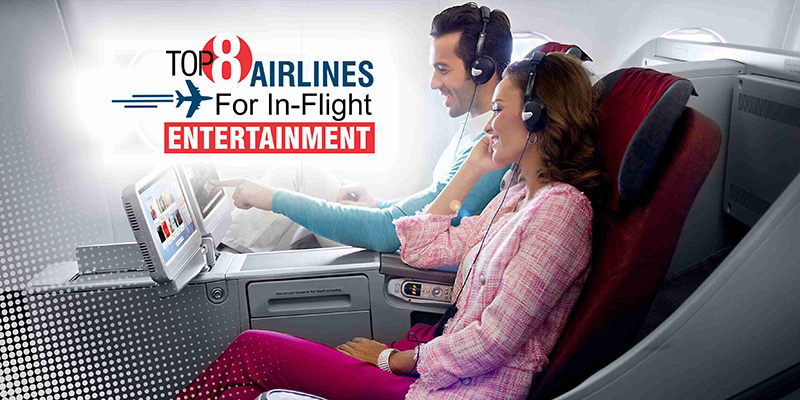 As a number of flyers bring their Pads, Kindles, and smartphones with each passing year, there are plenty of passengers in a flight who rely on the Airline for the entertainment.

These are the 10 airlines which have the top in best in-flight entertainment:

The widescreen Ice digital system of Emirates includes movies, music, live news, U.S. and international TV shows, sports, games and on-demand T.V. shows and movies in multiple languages. Their product is getting better day by day and Emirates has been voted as the best in entertainment for 10 years running.

Around 2000 options for entertainment, Which the Qatar Airways are offering including the recently released movies, games, TV box sets and audio recordings.

Back in the summer of 2015, Qatar presented the entire Marvel cinematic universe of 11 superhero flicks.

The airline became also offers 3D games on eX2 Platform, which you can also play against fellow passengers.

There are widest of options available for entertainment in Qantas and there are enormous 1500 entertainment options, including 100 movies in their A-380s.

Before flying, you can enjoy 12 free hours of newspaper and magazine downloads.

The in-flight system of entertainment has an E-box which includes about 100 movies, 300 popular T.V. shows, 16 radio stations, 7 news channels, 60 games and a music library.

Cathay Pacific has a StudioCX System which has U.S. and Asian, playlists, Movies, TV and publications available on the screens behind the back of the seat.

There is also a Mobile app version of Cathay pacific’s discovery magazine for travel, lifestyle, food, and adventure articles.

The In-flight entertainment system contains more than 50 films and dozens of entertainment shows which includes new releases and premium offerings like Game of Thrones.