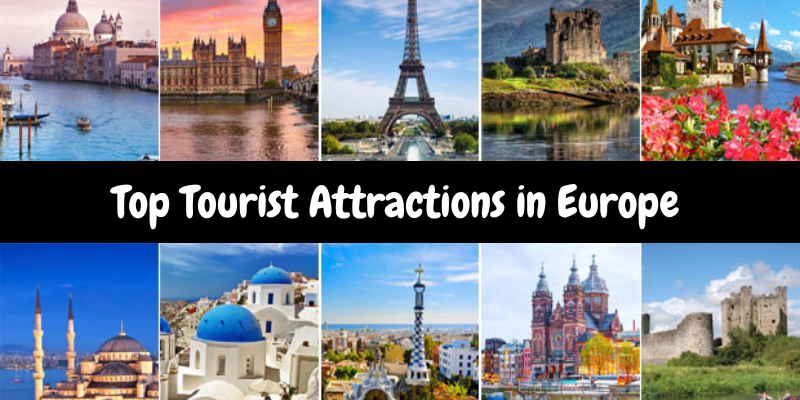 Tourist places in Europe indubitably hold the top position when we talk about the most famous attractions in the world. In the same fashion, the continent offers a plethora of amazing travel experiences. The visitor can choose to explore a single country or even many countries if they wish. European countries indeed have a lot to offer to the tourists that come here. Sometimes there may be instances that travelers can find it tough to pick the best places to explore. After all, there are countless such attractions that can entice a traveler quite comfortably. Nevertheless, we will tell you about some of the finest attractions that are a must visit while you are in Europe.

The Eiffel Tower in Paris, France is one of the most famous attractions in Europe. It lies at the heart of Champ de Mars in the city of Paris. The first thing to remember is that originally it was built in order to serve as an entrance to the 1889 World’s Fair. The tower has three levels which house restaurants, cafes and gift shops. Apart from that, there is an original restored office of the engineer Gustav Eiffel with many observation decks. People can access the first two levels of the Eiffel tower via a staircase or a lift whereas the third is only accessible through an elevator. The tower can be seen glowing with golden lights at night. It is something that makes it look it magical.

The Flavian Amphitheater in Rome is famously known as the Colosseum. It’s one of the most iconic symbols of imperial Rome as well. It is thus one of the most frequented tourist sites in Italy by all means. The Colosseum was built in AD 70-80 under the emperor Vespasian. It’s made up of travertine limestone and volcanic rock. It was the world’s largest amphitheater which held around 80,000 spectators during its construction.

It’s rather such an imposing structure and had a velarium as well as wooden floor. The floor was covered with sand and the velarium was to protect the spectators from bad weather. Under the floor there were animals and gladiators held before the fight. Not only this, it amused people with so many other utilities it provided for. From shows and spectacles there were enactments of many famous battles as well. Above all, the Colosseum has also been a fortress, a shrine and a makeshift housing. It was immensely looted by the stone robbers in Rome.

3. The Acropolis of Athens, Greece

It is one of Greece’s ancient citadel and an extremely famous tourist destination. Most of the Acropolis’ buildings were constructed in the 5th century. This construction was undertaken under the patronage of General Pericles. Another key point is that the heart of the Acropolis is the Pantheon. Pantheon is a temple built in order to thank the Gods for the victory over Persian invaders. Propylaea is the gateway which serves as an entrance to the Acropolis. Apart from that, the Erechtheion Temple and Athena Nike are other important buildings.

Stonehenge is unequivocally one of the most famous landmarks in the U.K. it was built between 3000 BC and 2000 BC. The area is indeed famous for its burial mounds in England. There is a massive ring of four-meter-tall sandstones. The inner stone circle is in the shape of a horseshoe. As can be seen, Stonehenge and its surroundings are a UNESCO World Heritage Site. It’s strange that the purpose of Stonehenge still remains a mystery. However, the archeologists still believe it might have been a burial ground during 3000 BC. Apart from that, it also could have served as a Neolithic calendar, a scientific observatory or a religious place. The stones weigh approximately around 25 tons each and were brought from at least 19 km away.

It is the world’s largest art museum and one of the most famous tourist attractions in Europe. In fact, a lot of people visit the museum which sits on the bank of the Seine River. The 13th century Louver Palace has been extended and rebuilt over the years. Ultimately, a 73,000 square meter building is a result of these constructions we see today. Not to mention, the glass and metal pyramid is the modern symbol of Louver. Besides that, the museum houses a stunning collection of 3, 80,000 objects. Out of these around 35,000 are on a permanent display. Paintings, drawings, sculpture as well as archeological items are a part of these items on display.

The most compelling evidence that makes it the greatest museum in the world is because of the paintings it houses. The world famous Mona Lisa painting by Leonardo da Vinci and Venus of Milo are on display here.

You won’t be surprised to know that approximately two million people visit this castle every year. Therefore, it is no doubt one of the most amazing tourist attractions in Europe. The Guinness Book of Records also recognizes it as the largest castle complex in the world. It is definitely a stunning combination of Gothic and Romanesque architectural style. The castle dates back to the 9th century and some structures in the 70,000 square meters complex were built later. The grounds of the castle also house the office of the President of the Czech Republic. Apart from that, it also houses a secret room which holds the Bohemian Crown Jewels. You can also see the National Gallery museum branch within the castle as well as a wooden toy museum.

The Prussian King Fredrick William in the 18th century gave orders to build the Brandenburg Gate. Hence, since then it has become a symbol of Berlin. Quadriga or a chariot drawn by four horses crowns the massive gate. Another key point is that the gate is 26 meters high and 65 meters long. It owes its name to the town of Brandenburg an der Havel. It is equally important to know that the gate has been a part of many important historical events shaping Germany. We can’t forget that it was serving as a Nazi symbol in the past during the Second World War.

Moreover, in spite of being heavily damaged it survived the explosions and shootings. Later down the years it became an unofficial border between East and West Berlin. But later the Berlin wall was constructed as an official border of east and West Germany. At its demolition in 1989, one lakh people were seen celebrating at the historical gate.

The magical floating city in Italy is famous for its overwhelming beauty and history that pleases every visitor. There are around 150 canals which run through the city of Venice. As a result, they connect around 118 tiny islands via 400 bridges and walkways. Specifically, a romantic gondola ride is one of the most famous things to do in Italy. However, the magic of the city of Venice doesn’t end there itself. There are a lot of charming laneways, passages and hidden courtyards. Along with all these, you can see Gothic and Renaissance architecture on the banks of the canals. Tourists appreciate the architecture from the water as they travel under the bridges.

Gondola and the vaporetto serve ideally while the tourists can enjoy sightseeing riding on them. Besides that, we can’t forget Venice’s Grand Canal which is the main water-traffic corridor of the city. After all, it’s over the canal that you find the palazzos, churches and the Rococo-style Rezzonico Palace. A facade completely of white marble makes it one of the most famous tourist places in Europe.

The Matterhorn, which is 4,478 meters high, is one of the highest summits in Europe. The majestic mountain sits over the beautiful town of Zermatt. Zermatt is on the border of Switzerland and Italy. In fact, it is quite a popular hiking destination in the Swiss Alps. The Matterhorn is a pyramid shaped mountain and tourists can climb it from all four sides. Apart from that, it offers a hiking opportunity for non-climbers as well.

A ten day trek around the mountain is a great way to relax and enjoy the beauty of nature. Rather, it is one of the most beautiful hikes in the Swiss Alps. It’s surrounded by glacial lakes, Alpine forests and stunning flowering meadows. Moreover, the area around Matterhorn and Zermatt is a famous snow sport destination. You’ll see skiers and snowboarders during the winter and the resorts nearby offering ski lifts. The Matterhorn-Museum is another famous attraction and a spectacle in itself for tourists.

Amsterdam’s Canals are also known as “the Venice of the North”. In fact, Amsterdam has sprawling canals spread around hundreds of kilometers. These water bodies thus cut through the city and present an amazing exhibition for the tourists. The city has mainly three canals- Herengracht, Prinsengracht and Keizersgracht. In particular, these pass under around 1500 bridges connecting the islands. The Prinsengracht canal is indeed the most famous amongst all these canals. Notably, a number of eminent edifices sit on the shore of this canal in the city. For example, Anne Frank’s house; Amsterdam’s tallest church, Westerkerk and the Deutzen House. Not to mention, the Brouwersgracht is another famous canal. It was once in use for the ships that brought spices from Asia. However, nowadays you’ll see a lot of houseboats over here. Along with that, there are chic, expensive apartments and lofts.

There’s no doubt that in recent years there has been an outstanding growth in the European tourism industry. As a result, it has also brought along employment as well as foreign exchange for the Europeans. Millions of people from around the globe visit and explore this fascinating continent. It’s equally important to remember that traveling here can cost you a good amount of money. In particular, booking flights to Europe can be quite costly. But, if you choose the right travel partner it can help you save big on them. Therefore, we have brought you the coolest offers for your flights.

IQ Fares is one of the best platforms that can help you book the cheapest ever flights to Europe. With all the available options to choose from we make your air travel absolutely hassle free. Hence, so many of our customers rely upon us and repeatedly book their flights with us. This indeed is a testimony for their trust and confidence in us. Likewise, if you are also planning to travel to Europe, you have come to the right place. We will help you steal the best deals on your flights. Moreover, we will assist you with all that we can do to make your trip an experience of a lifetime. Get in touch for more and let us have the privilege to serve you with the best.