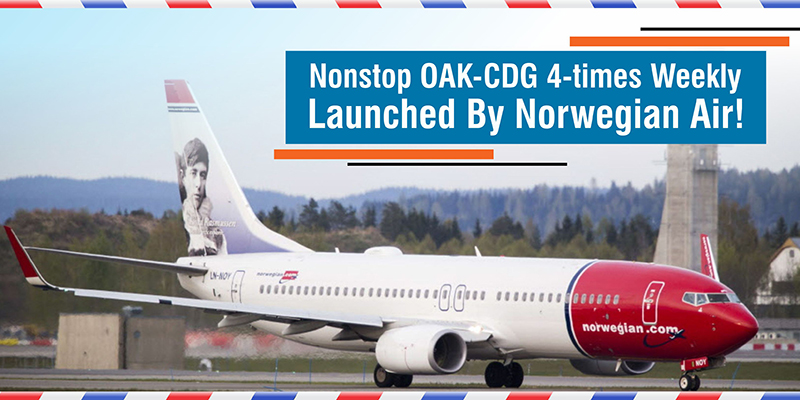 Now it becomes much easier to travel between Paris and the San Francisco Bay Area as Norwegian Air starts its new nonstop service to Oakland International Airport (OAK) on April 10.  The announcement was made by the officials at Oakland that the new nonstop service between OAK and Paris Charles de Gaulle Airport (CDG) will arrive in the afternoon, operated by a Boeing 787 Dreamliner.

The flight will be operating 4-times weekly on Tuesdays, Thursdays, Saturdays, and Sundays covering 5,561 miles in approximately 11 hours as Charles de Gaulle is the largest of the Paris-area airports.

Bryant L. Francis, director of aviation for the Port of Oakland said that they are delighted to welcome this new nonstop flight between Paris and Oakland. He also said: “Since its arrival at OAK in 2014, Norwegian has continued to be a key partner in growing Oakland as a major gateway between Europe and the San Francisco Bay Area. This new Paris route brings OAK even more into focus as an easy and convenient choice for travelers both locally and abroad.”

Since the airline’s arrival in 2014, the route from Paris joins half a dozen nonstop routes launched by Norwegian between Europe and Oakland, which includes Copenhagen, Barcelona, London-Gatwick, Oslo, Rome, and Stockholm.