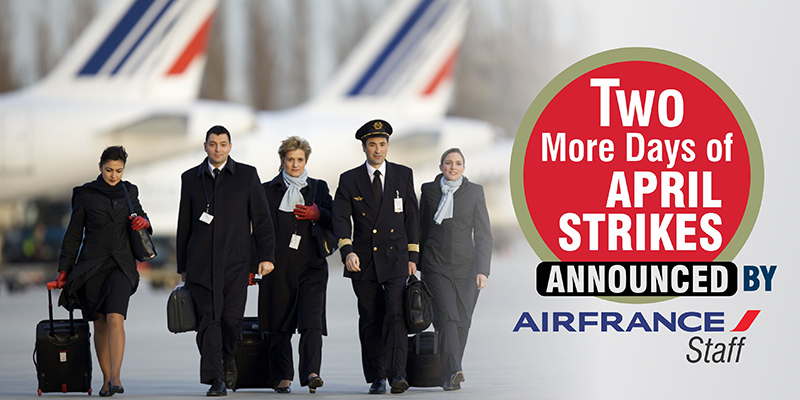 Unions have announced two more days of industrial action in April and thousands of passengers will be affected by further strikes by Air France staff.

On Monday, more strikes were announced by the unions which represent Air France staff in response to an ongoing dispute over wages.

Already planned for March 30th on Good Friday, that’s on top of the action which looks like causing a major Easter headache for some travelers.

To demand 6 percent of pay rise across the board to make up a loss of their spending power in recent years due to stagnating wages, unions representing pilots, cabin crew and ground staff have called the strikes.

Management has offered a basic increase of 1 percent which is to be paid in two installments and a range of incentives. Trade unions have dismissed this offer as “small change”.

Having a response to none to the demands already expressed during the strikes of February 22nd and March 23rd, the unions representing Air France staff have said they will toughen up the pace of the strike action in the face of the airline management.

Negotiations between the union and Air France’s management are set to continue on Tuesday so there may yet be a chance that the strikes are called off.

The call to strike was replied by some 35 percent of pilots, 29 percent of ground staff as well as 31 percent of cabin crew staff.