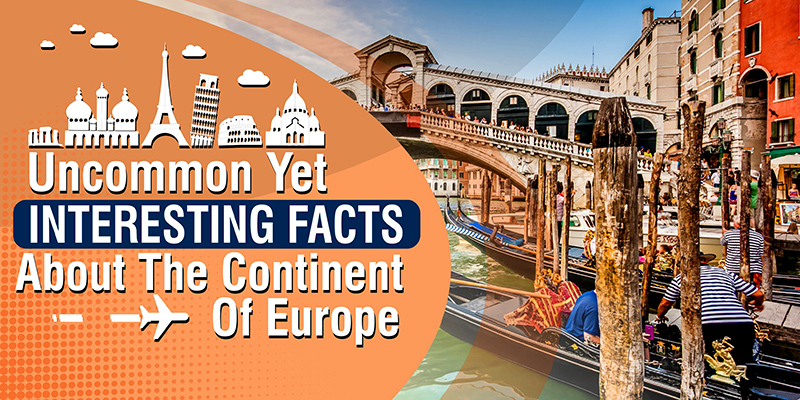 Located entirely in the Northern Hemisphere and mostly in the Eastern Hemisphere, Europe is a continent. It also includes the westernmost part of Eurasia.

Europe is a continent but there are many people, who still take Europe for a country. That is surely scary.

Istanbul, since the ancient times has united Asia and Europe through the mighty Strait of Bosphorus. It is one of the most beautiful cities around the world undoubtedly. It is the only metropolis in the world, which bridges the continents Europe and Asia.

Europe is home to the largest country in the world, Russia and the smallest which is Vatican City State.

According to the World Factbook by CIA, Russia is comprised of 17,098,242 sq km area of land, whereas the Vatican City State has only 0.44 sq km of area.

The statue of liberty was designed by Frédéric Bartholdi, a fact which is very uncommon among people. The colossal neoclassical sculpture was given as a gift of friendship to the United States of America but was built in France.

The overall height of the statue is 305 feet, 6 inches. Replicas have been created of Lady Liberty all over the world. The most famous one is located in France.

Europa was the name of beautiful Phoenician princess according to the ancient Greek mythology. She was the daughter of King of Tyre, Agenor. When Zeus felt his love for Europa, he decided to disguise himself in front of her as a magnificent white bull to gain her trust.

When princess sat on bull’s back, she was immediately carried to Crete and Zeus unveiled himself to Europa in all his glory.

Solid pieces of evidence have been found in the last 40 years that the Mediterranean Sea frequently dried up completely in the past. The event is called as Messinian Salinity Crisis. It was an amazing story told by Kenneth J. Hsu in ‘The Mediterranean Was a Desert’.

History tells us that many of the greatest empires were based in Europe. At one time, the British empire as the largest empire in the world covering more than 36 million square kilometers. It comprised population between 480 and 570 million people.

French Empire, Portuguese empire, Russian empire and Spanish empire are other examples of colonial empires that once were based in Europe.